We had some downtime this weekend so we volunteered our time to play a set at 'Do it For Dan'. A fund raiser put together by some generous musicians and community members in Wolvi, just outside Gympie.
Dan is a family man with young children and a wife to support, he works as a security guard at many of the local live music venues.  Although we have never met,  When he sustained some very serious injuries from a motorcycle accident on his way home from work & we heard about his plight we felt we should lend a hand. With his being in an industry so closely related to ours we understand only too well what it's like to be sick or
injured and unable to work, the income stops and there is no safety net or back up.
So we set off on a band road trip to Wolvi, a place we have never been before. It's a tiny town out in the serene bushland with nothing but an old wooden town hall to mark it's existence, and that's where the action was.
We arrived in the evening and the event had been going since midday, but the local support was on show & there was still a fairly large crowd in attendance.It was a wet old night but there was a good ole country fire outside to warm and dry ourselves after the wet load in.
The chix hit the stage around 8:30pm & played a well received set of blues covers and original tunes. We made some new friends that night, met a few facebook friends in person for the first time and as always, when 'The Chix' get together had us a good time.
Big Thanks to Daniel Day for putting together the line-up and all the generous souls who donated the equipment,their time, goods etc. We love seeing community/people power in action & We truly hope it has helped ease the burden for Dan & the Podetti family. 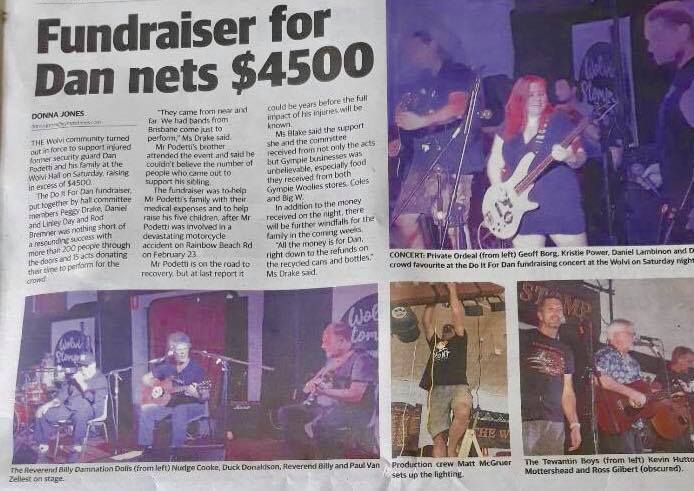